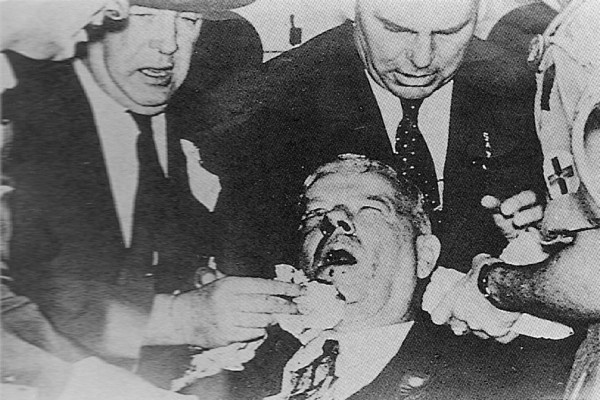 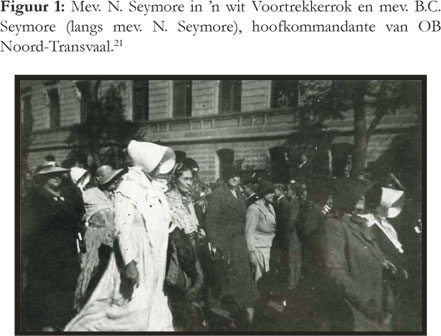 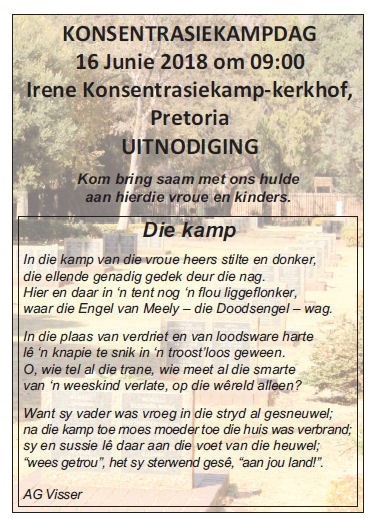 June 25, 1993 The AWB invades the World Trade Centre in Kempton Park near Johannesburg, where the so-called "Multi-party Negotiating Process" is underway for to make further evolution of the Republic of South Africa (RSA) empire on the capitalism-communism way.

The World Trade Centre, just next to the Jan Smuts (now [2012] Oliver Reginald Tambo) international airport in the town of Kempton Park on the East Rand, was situated about 30 kilometres outside Johannesburg. There, in December 1991 and May 1992, were held meetings of the KODESA (Konvensie vir ‘n Demokratiese Suid-Afrika, in English: Convention for a Democratic South Africa), whose aim was to make further evolution of the Republic of South Africa (RSA) empire on the capitalism-communism way. Rather than restore freedom for all peoples of southern Africa (and also to the Boer, who had lost in 1902), wanted to expand the boundaries of that Empire, instead of erasing the false nationalisms (such as “White” and that “white Afrikaner”, created by international capitalism to give an identity to the Empire of the RSA), wanted to erase the true identities of all volk in the region. The international capitalism that had conquered southern Africa, felt itself ready to implement the next phase of its diabolical plan, aimed at a more stringent imperialism. The political administration of the “new” RSA Empire would be entrusted to the major political force in the Empire: a Communist force that international capitalism had helped to create, assist, finance, and promote.
From 1 April 1993, Nasionale Party (NP) and African National Congress (ANC) were started at the World Trade Centre the so-called “Multi-party Negotiating Process”. This was attended by 26 organizations. The meetings were three to four a week. The objective behind the creation of this Forum was to make it appear as shared choices that had already been taken, and that would have deprived many nations of their freedom.

Many parts of the text that follows are taken from chapter 20 of the book “Victory or Violence: The Story of the AWB of South Africa”, by Arthur Kemp. Additions and changes are by Volkstaat.org.

By then the name "Kempton Park" and the "World Trade Center" had become synonymous with negotiation. Negotiations with the communist terrorists, released and ready to take political control of the whole southern Africa. All nations of southern Africa were to be delivered to well-known terrorists, who had killed with the goal of establishing a communist regime.

In early June 1993 the Negotiating Council set the imperial elections to April 27, 1994. A few days after the request of the Zulu Inkatha Freedom Party (IFP) for a federal constitution was rejected, and so also the one who asked for a homeland for the Boers.

The Afrikaner Volksfront (AVF) coalition (a heterogeneous coalition that included white Afrikaner “nationalists”; Boer nationalists; and many former generals of the armed forces of the RSA Empire) announced that a public protest meeting was to take place outside the huge building on 25 June 1993 and that the AVF leaders, Terre'Blanche included, were to hand over a petition to the main negotiating forum demanding that they take cognizance of the demands of the AVF.
The Afrikaner Weerstandsbeweging (AWB), that was the major component of the coalition of the AVF and at that time demanded the restoration of the Boer republics (on about the 14% of the territory of southern Africa), however arrived in full force, and of the approximately six thousand people who attended the rally, at least three quarters were AWB supporters. The AWB also arrived with a commercially available armoured vehicle (usually used for transporting cash and valuables by private security companies) called a Viper. The imperial police had seen this vehicle at other AWB rallies before, and were therefore not too concerned about its appearance. 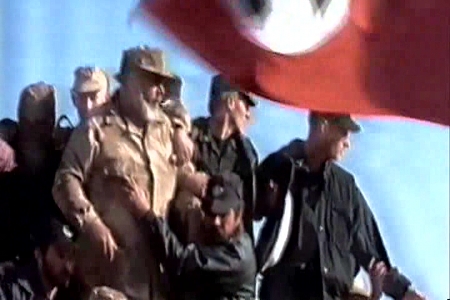 The security controls at the gates to the World Trade Centre grounds were fairly secure, with police only letting official delegates through. However, just before 9.00 am, a car driven by a demonstrator followed an official delegate's car through the gate, stopping at a critical point in the crossing which prevented the police from reclosing the gate. This was the chance the crowd had been waiting for, and immediately they stormed through into the centre grounds, heading straight for the building housing the negotiation chamber, which by that time of day was already in use by the official delegates.
AVF leading figure general Constand Viljoen (the former head of the Army of the RSA Empire), who led the “directorate” of the AVF, tried in vain to stop the crowd from marching on the building, but they stoicly ignored him. The Viper armoured vehicle then entered the grounds through the by now abandoned gates and drove in front of the crowd right up to the glass fronted building, where a thin line of uniformed policemen were attempting to hold back the crowd. Terre'Blanche himself, dressed in AWB-Wenkommando camouflage uniform, came riding in on top of the Viper, surrounded by men of the Ystergarde. At his side was also gen. Nico Prinsloo, the AWB secretary general. 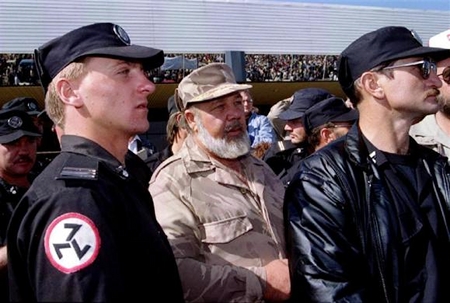 After a very short, the heavily outnumbered and outgunned police retreated inside the building. While Constand Viljoen with a megaphone tried to dissuade the crowd from further actions, the Viper came quickly to the glass doors.

The armored vehicle was driven by AWB-Wenkommando Gen. Alec Cruywagen, and with him was Cmdt. Gen. Dirk Ackerman. Dirk Ackerman was the AWB chief of staff, he had replaced Servaas de Wet earlier in that year.
After a few moments the Viper smashed in through the glass doors, opening a large hole through which hundreds of AWB uniformed members stormed, shouting “AWB! AWB!”.
The first to enter in the center was a boy with Ystergarde uniform, Cruy Cruywagen, son of Gen. Alec Cruywagen. 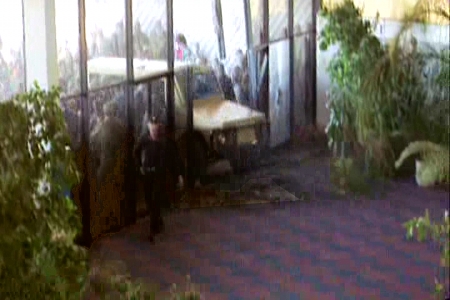 The mainly AWB crowd rampaged through the building, eventually finding their way into the negotiation chamber itself, which had been hastily abandoned by the delegates. The police decided not to act and merely sent in their own video teams to film as many people in the crowd as possible to try and pick them up at a later stage.
Inside the building and negotiation chamber the AWB men and women rifled through files, briefcases and even helped themselves to soft drinks they found in a fridge, while the official delegates cowered in locked back rooms, hoping that the mob would not find them. Some demonstrators came prepared with spray paint tins, and sprayed slogans on the walls of the building. A Sunday newspaper journalist later made the allegation that the AWB crowd had urinated on the floors of the negotiation chamber, something which was definitely untrue.

The Viper was left parked in the building's entrance foyer for a short while, and then was escorted out of the grounds once again by a phalanx of Ystergarde men, many wearing balaclavas.
The police however managed to later trace the Viper and seized it as evidence to be used in the charge of public violence and trespassing which was later instituted against AWB members whom the police were able to identify.

While all this was going on, Terre'Blanche, General Constand Viljoen, General Tienie Groenewald and Konserwatiewe Party (KP) leader Ferdi Hartzenberg had proceeded to hand over their memorandum -as had originally been the point of the protest meeting - to Imperial government representatives. However the memorandum was completely ignored by capitalist-communist controlled media. 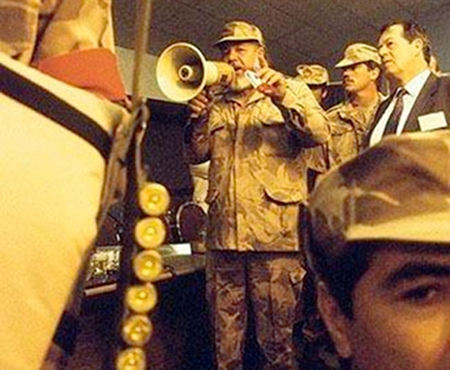 After several hours, Terre'Blanche appeared in the chamber and ordered his men to leave as they had made their point and the petition had been handed over.

The men of the AWB, including Terre'Blanche, joined in prayer in the negotiation chamber. With them were also Gen. Constand Viljoen and Gen. P.H. (“Tienie”) Groenewald (former Chief of Military Intelligence of the RSA Empire) of the “directorate” of the AVF. They asked protection to Heavenly Father, not end under the rule of atheists, communists and terrorists. 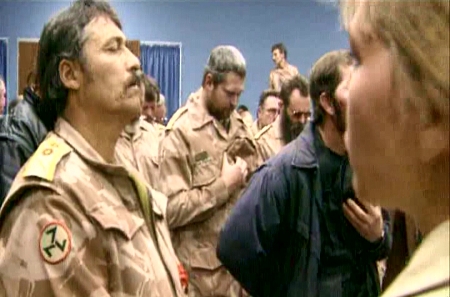 The AWB men then left the building, formed columns outside on the grass area and simply marched away, AWB band playing, leaving behind a severely damaged building and many frightened delegates and officials.
Not one shot had been fired, and no-one had been hurt - apart from the Indian Amichand Rajbansi (the same one who had in the mid 1980's been accused of threatening Terre'Blanche's life in the famous “Rajbansi letter” incident) getting a open handed smack in the face from a hooded AWB man when he wandered into the negotiation chamber at the height of the AWB occupation.

It was clear, watching the faces of Viljoen, Groenewald e Hartzenberg (all prominent figures of the AVF), that they were shocked by the action of AWB of that day. Viljoen even had done everything to prevent it. Why?
Surely career soldiers couldn't get frightened by a similar action, where never a shot was fired. As it was illogical that they were annoyed by that, since it was completed with great success (the occupation of the World Trade Centre without firing a shot!), which was echoed all over the world.
The AVF (at least in theory) was created for to bring together political movements and military sectors of the Republic of South Africa (RSA) empire, in order to obtain, peacefully or by force of arms, an independent state. Therefore (in theory, at least) they were preparing to something much more hard: the Unilateral Declaration of Boer Independence (in the western Transvaal).

So why?
The only explanation that makes sense, then confirmed by history, is that day Viljoen, Groenewald e Hartzenberg were shocked and nervous because they were unable to perform the task that had been entrusted to them: to control the Boer independentism (which at that time was mainly the AWB), for it to fail. That is: the historical mission of the white Afrikaner “nationalists”.
The AVF was founded because of that.
That day, however, showed that the AWB would go on by itself. And this shocked, nervous and frightened the leaders of white Afrikaner “nationalism”, who already took orders from their new masters, the new directors of the Empire.

The AVF tried to politically isolate the AWB. After the successful invasion of the World Trade Centre was asked to the AWB to leave voluntarily the AVF coalition. However, the AVF leadership soon realized that the action of the AWB action had been overwhelming popular support amongst the Boers, so the demand was allowed to lapse. That is: the AWB was too strong, had too much consensus, and was composed by too determined men, to leave it to act freely.
The AWB remained in the AVF in the belief, later revealed as absolutely wrong, that the other components of the coalition were still working for the liberation of the Boers. It was not.