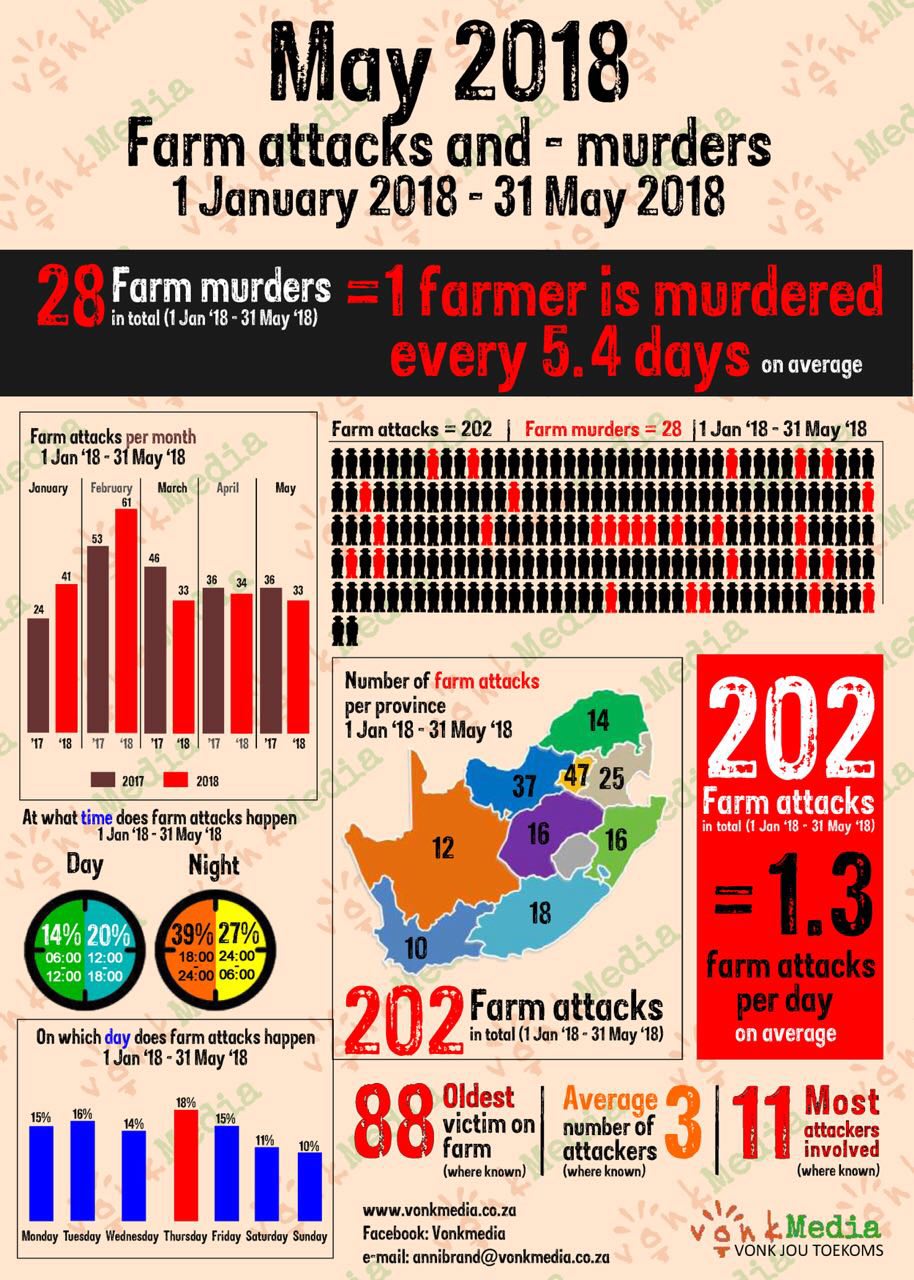 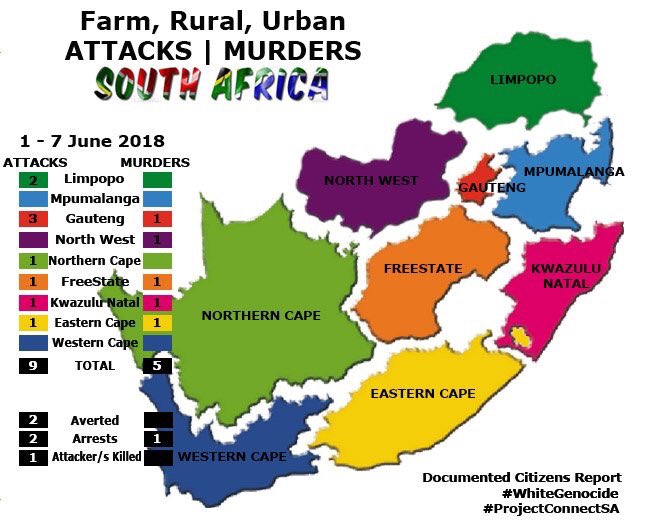 A total of six farm attacks have been reported to have happened today.

A man was been shot dead while a woman was shot and injured in a farm attack at Komatipoort in Mpumalanga on Sunday, police said.

The man was shot once and the woman several times, said Colonel Mtsholi Bhembe.

“The man was certified dead at the scene by paramedics whilst the woman was rushed to hospital,” said Bhembe.

Bhembe said it was alleged that three men, who wore balaclavas, attacked the farm at about 08:30.
“It is alleged that the trio gained entry onto the farm by firstly attacking and restraining a security guard whose hands and feet were tied,” he said.

He said they then ordered the man, who was outside, to go into the house where they tied his hands and feet.

They did the same to the woman when they found her in the house, Bhembe said.

“Suddenly shots were fired and both victims were hit,” he said.

He said the woman’s son was awakened by the sound of gunfire and went to investigate, in the process disturbing the attackers.

“They then fled the scene, taking the deceased’s cellphone with them. Police are investigating a farm attack murder and attempted murder,” he said.

No arrest has been made yet, added Bhembe. 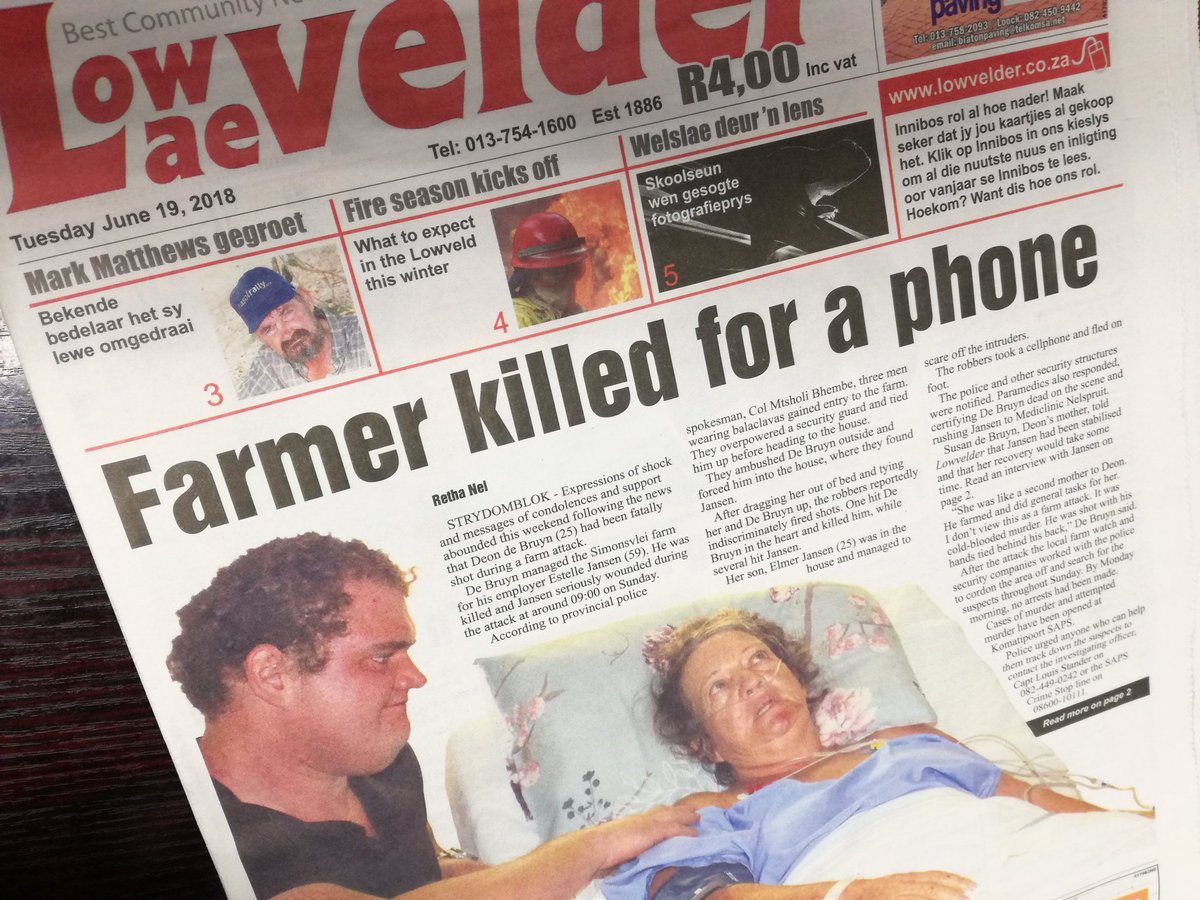 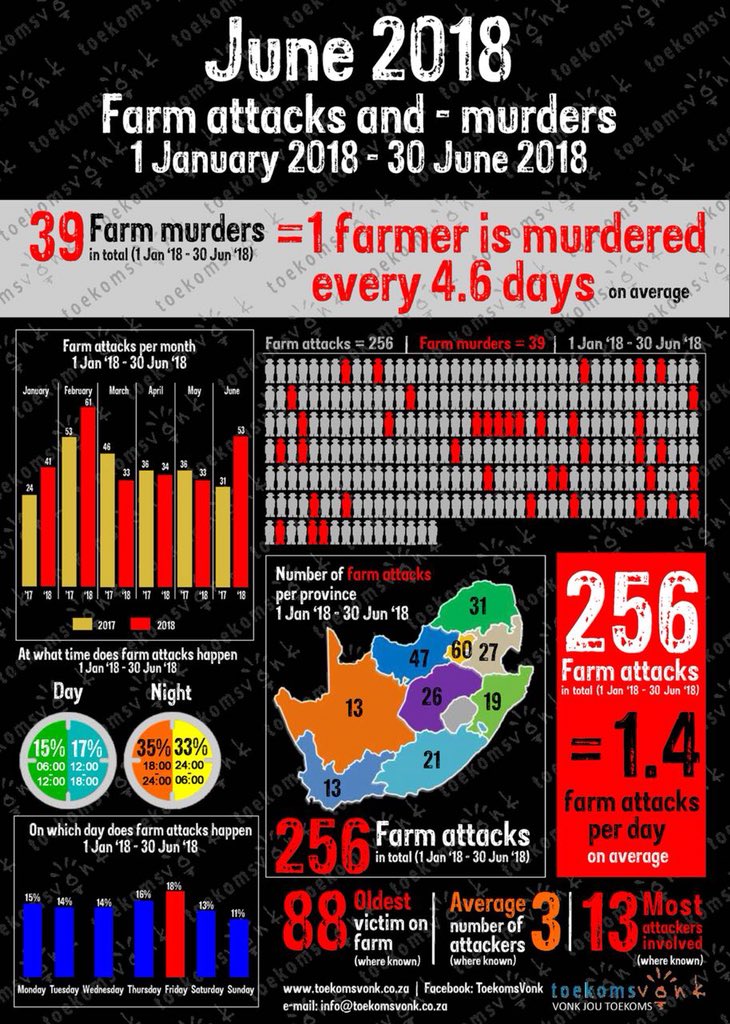 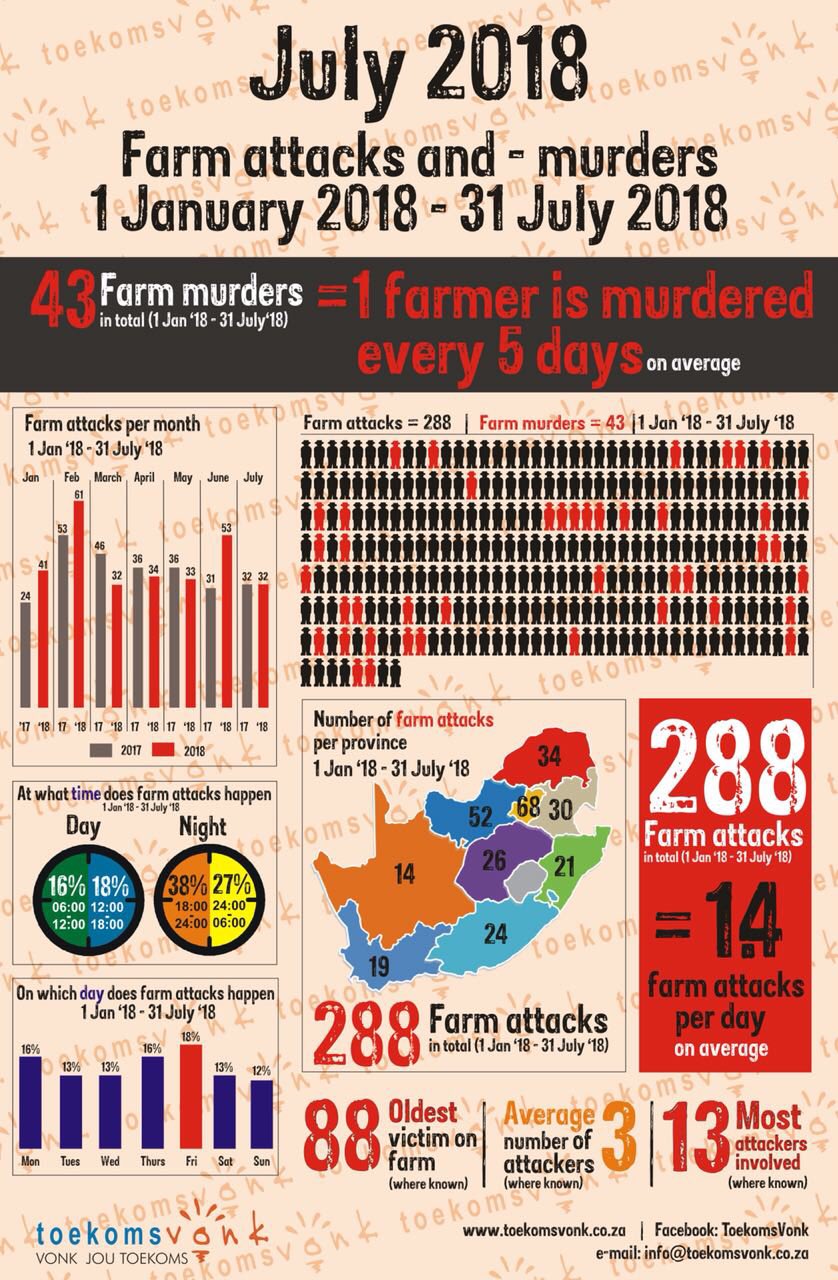 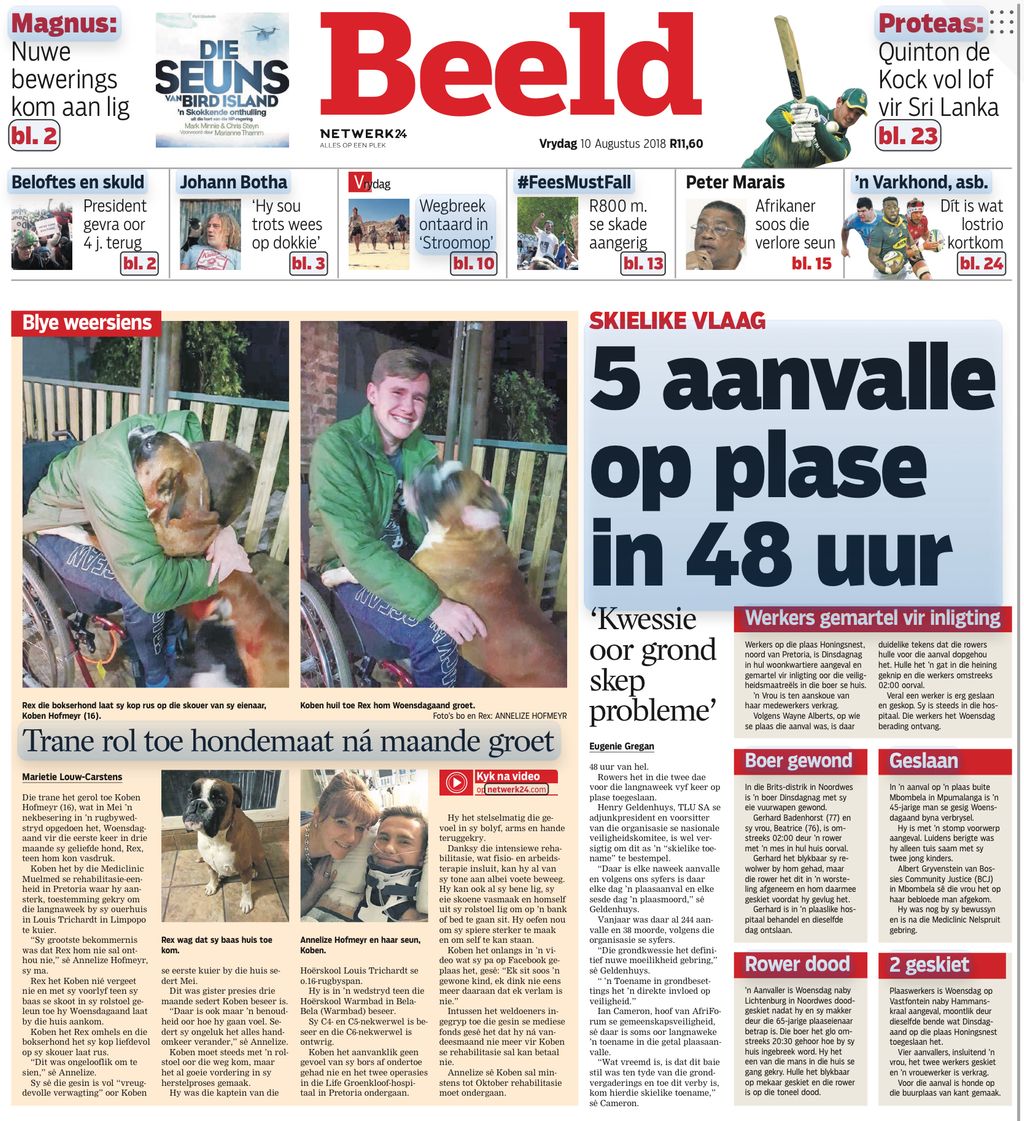 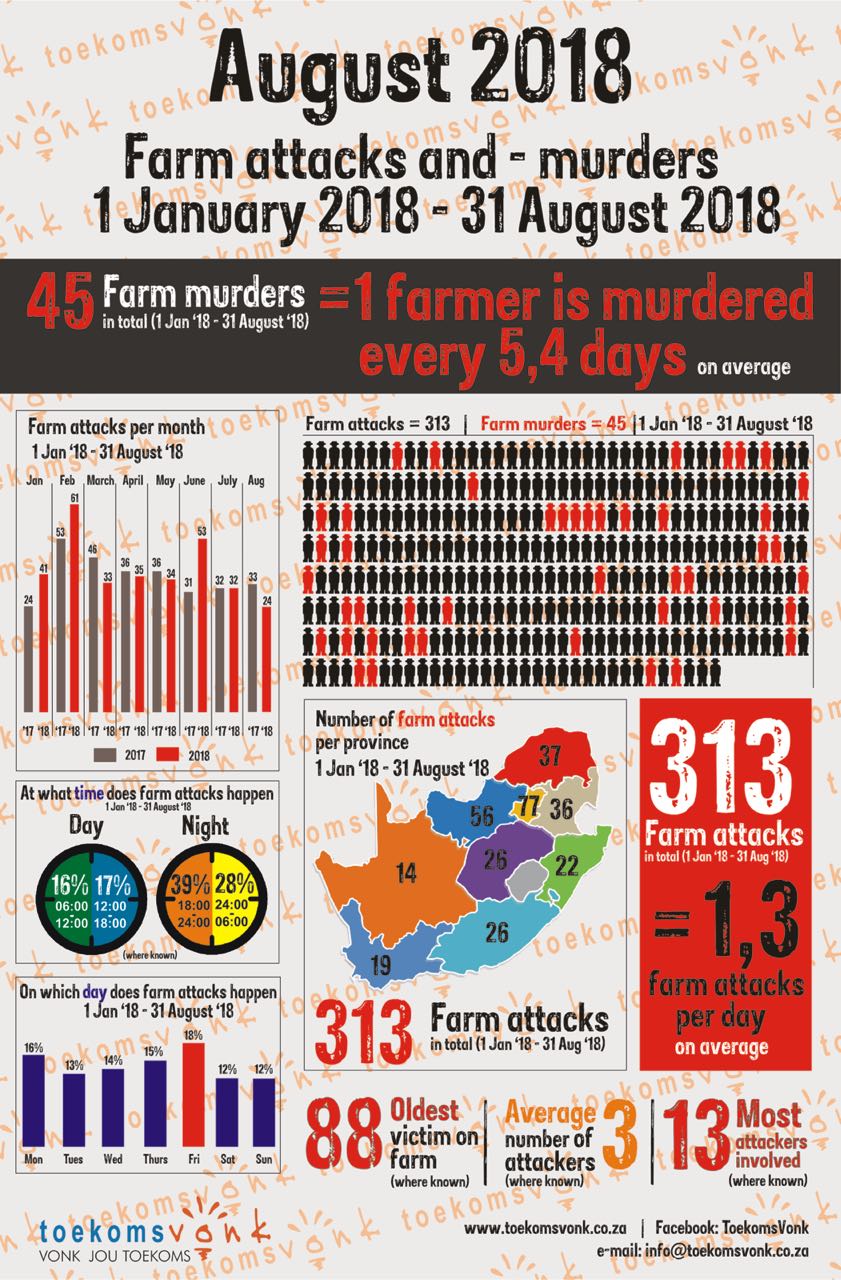 Eight Farm attacks this week 21-29 September 2018. None reported in the mainstream media: 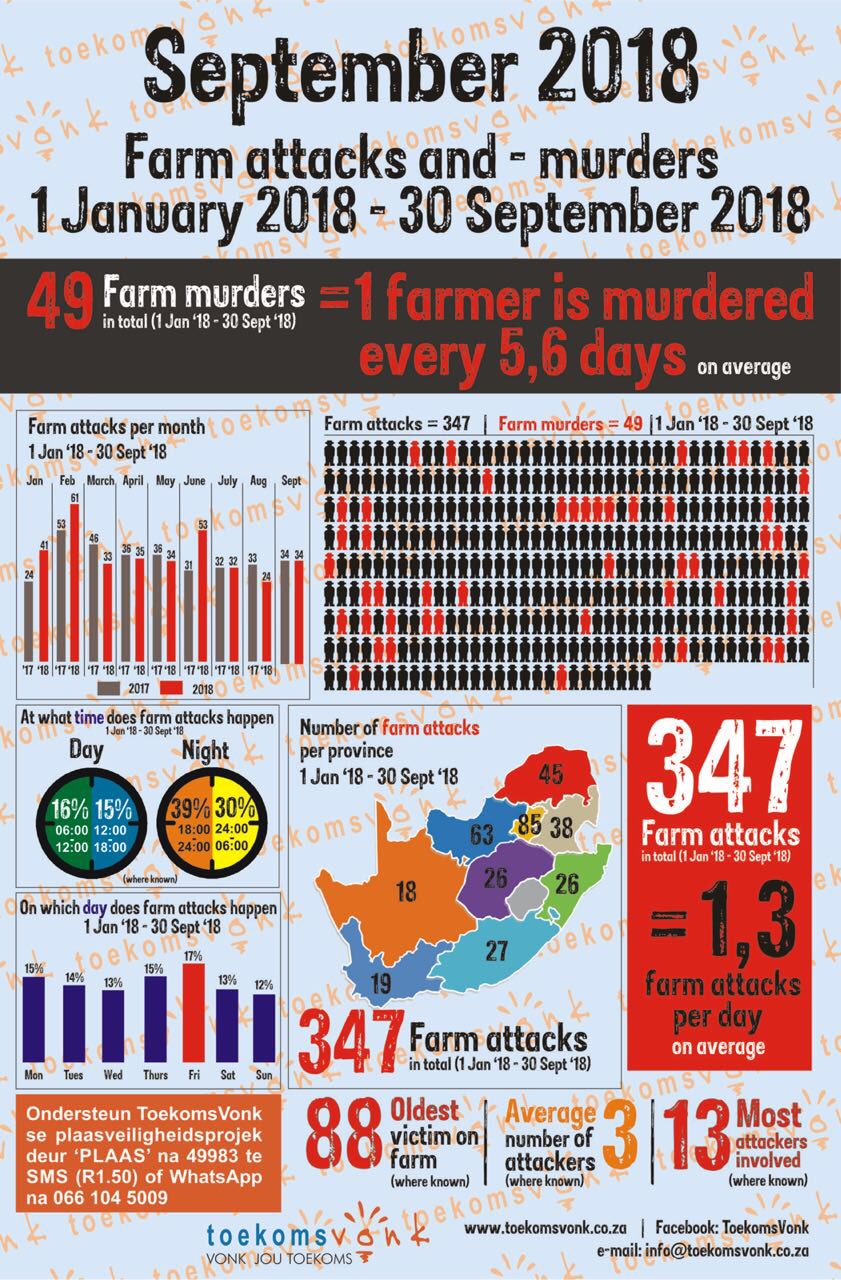 A farm attack has taken place in Bergville, KZN Province on 9 October 2018. Six men wearing police uniforms who were heavily armed entered the farm giving a false reason to farmer for their visit. They then stole firearms and demanded money and fled in a silver jeep and toyota.

It has been reported that some arrests have already been made and some firearms retrieved. There is no other information available at this stage, nor any reports of any injuries.

The attack was tweeted by Ian Cameron of AfriForum

A brutal attack took place at the Kolgans Dam in Fochville, in the Gauteng Province on 13 October 2018. Two black men attacked a...

A farm attack took place on 10 October 2018, at 17:15 between Boons and Magalliesburg at Syferbult, in the North West. Three armed attackers...

A farm attack took place in Northam, Limpopo at 01:20 on 10 October 2018. Two farm workers were attacked by at least ten attackers....

The video message of a widow, whose husband was murdered in front of her and her children during a farm attack to Pres. Cyril... 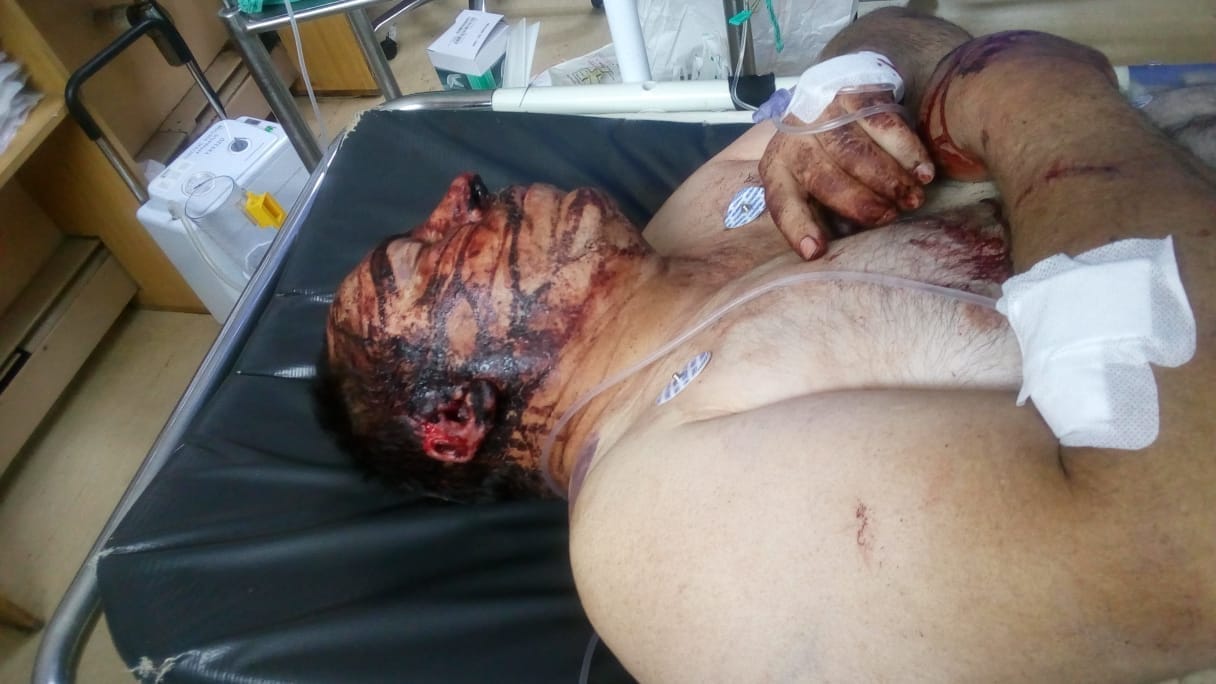 Denialists, liberals, ANC Ministers and Commissioners of Police all try to argue the same thing: Farm attacks on white farmers in South Africa is...

Mariandra Heunis who, at the time heavily pregnant, survived a farm attack in which her husband was brutally murdered, last week recorded a video...

A Man in his early 80s and his daughter returned from church, they unlocked and then locked the main gate at the main road,...

A savage farm attack took place in Middelburg, Mpumalanga Province, between Loskop Dam and Middelburg on 7 October 2018. An elderly male victim and...